In the twilight of my glorious summer, I’ve haven’t had a ton of time to write because I’m usually spending some quality time with the people I care about before heading back to school to begin my second year of medical school. Since my last batch of movie reviews, I’ve been drinking Moscow Mules on the beach, spent some time in Chicago with friends, and of course, catching some good movies in my nights at home.

Because it’s been a month, I have about a dozen movies to review so I’ll likely post the next installment shortly after this one. While I’ve seen some snoozers, lately I’ve been on a hot streak and watched some a string of awesome horrors that score very highly in my nonsensical rating scale. The next two sets of reviews will contain some absolute gems, so read on for some recommendations. 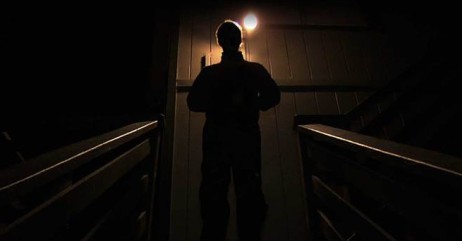 Like the rest of the movie-going world, I too am a bit sick of found-footage horrors. However, Creep takes the low-budget approach and delivers a crisp 80-minutes of raw tension as a college-aged dude named Aaron responds to an online ad offering $1000 to film a guy for a day in a remote wilderness home. Mark Duplass (from The League), shows his acting range by playing the “creep”, a guy dying of cancer who wants to make a home video for his unborn son to watch. But Duplass doesn’t play your typical menacing horror villain, he’s seemingly just a normal dude with a quirky personality. After introducing themselves, he has Aaron film him stripping naked and getting into the bathtub for a “tubby”. Right then and there, I’d have said “keep your money, I’m out dude”. It’s laugh-out-loud hilarious at one moment, then heart-rate-spiking terror the next. As the film progresses, you start to wonder whether or not it’s a horror at all. Creep plays on your expectations, builds tension, then makes you laugh and realize that Duplass is just a harmless weirdo. Or is he?

I heard a lot of hate for Ridley Scott’s latest installment in his iconic Alien franchise. But I was up late one night and decided to give it a chance. Alien: Covenant is a fresh take on the classic space monster, but the xenomorphs in this chapter mainly feel like a side show to the real villain. Michael Fassbender, playing two roles, deserves credit for making this movie watchable. And it is – every moment of Fassbender screen time captivating. Just don’t go into this movie expecting to be blown away, fascinated, terrified, or anything else that you wanted the movie to make you feel.

Tom Cruise. Monsters. War. Yeah yeah yeah. Like Alien: Covenant, you shouldn’t go into this movie expecting it to be anything more than it is – a fun action movie. I thought it looked really stupid. But Edge of Tomorrow knows what it is, and executes it’s mission very well. Cruise isn’t his typical Mission Impossible badass and begins the movie as a pacifist who has never seen combat, but grows into the his hero shoes by the movie’s end. The fun of Edge of Tomorrow is that it doesn’t reveal all its secrets in the beginning, but keeps you watching as you piece together the mysterious sci-fi puzzle each time he dies, and dies, and dies again. It’s well-written with cool action, solid pacing, and a story that you will forget about ten minutes after seeing, but while you’re watching, you’ll be hooked. It’s a good time.

Caught this one when I was hungover on the couch hoping for a laugh. Starring Jason Sudekis, Jason Bateman and Charlie Day, the three main characters (who are supposed to be a source of laughter, right), are played by straight men (the two Jasons) and the unfunny, weaselly, and downright annoying Charlie Day. They don’t like their bosses, so they plan to kill them. Reasonable. The redeeming factors of the movie were in fact two of the “horrible” bosses – One played by Kevin Spacey, the corporate asshole. Another played by Jennifer Anniston, a nymphomaniac dentist (doesn’t sound that horrible to most people). And a third by Colin Farrell, a coked out moron. The three of them combined with Jamie Foxx, aka “Motherfucker Jones” were the source of a few laughs, but by the movies end, I sat there wishing for it to be over as the initial humor of the beginning of the movie had long worn off.

A reader who read my previous volume of movie reviews saw that I greatly enjoyed The Invitation and recommended Coherence, a psychological thriller/horror that also happens to take place at a friendly dinner party. Unlike The Invitation, Coherence delves into the supernatural and revolves around the ideas of comets disrupting time-space-continuum shit, opening pandora’s box of quantum physics with alternate realities and the examination of fate & chance. Coherence is like a low-budget Inception, jam packed with wild sci-fi theories. The idea alone is fascinating, but the improvised script and dynamic between the actors make for an hour and a half of pure suspense, mind-bending wonder, and eerie Twilight Zone-esque surrealism. This movie is proof that true terror lies in the mind, not just in the knife of a slasher villain.

I’m not a huge fan of westerns, but Quentin Tarantino’s outputs are all must-sees at some point for a someone who enjoys movies as much as I do. Following the success of Django Unchained, Tarantino delves further into the western genre with The Hateful Eight, a star-studded, beautifully shot tour de force in high stakes claustrophobic drama. Following rave reviews, and only two movies removed from his masterpiece (Inglorious Basterds), I was completely let down by The Hateful Eight. It’s Tarantino childishly indulging in his own praise. The opening carriage scene tries to hit the high point of Christopher Waltz’s pit-in-your-stomach masterclass of dialogue tension in the beginning of Basterds, but the end result is sheer boredom for what felt like two hours of exposition. Then we have what feels like another five hours of dudes telling stories and shooting each other. There are a few laughs, some cool scenes of action, and all the blood you could ever want, but it just felt boring. It may have been better if it were trimmed down and sharper, but even at that, The Hateful Eight is Quentin Tarantino masturbating to himself in the mirror as his classics play in the background.

If you enjoyed this post, be sure to check out the movies section of Soze Media here for more recommendations: Movies

Next up, I’ll be writing reviews for the summer box office smashes Dunkirk and Baby Driver, as well as What We Do in the Shadows and a few more. Stay tuned and follow me on Twitter for the latest post updates: @JordanSoze