Spent the last couple weeks working on my research, writing for a new project, getting drunk more nights than not, and spending my down time checking out movies, new and old. Some big-budget blockbusters, some indie picks, and even an unsettling Russian film. Read on for my latest batch of movie reviews and recommendations.

Check out my previous two installments:

Recently saw this one for the second time. This is one of the best horror movies I’ve watched in recent years. Like many of the best, it isn’t overly gory or filled with jump-scares, but rather it’s a master class work of psychological tension. Most horror films are similar to pornos in the sense that you don’t give a shit about the plot, and just want to see some titties or watch the annoying person in the group get stabbed to death. However, The Invitation succeeds by developing a compelling backstory, which is revealed slowly throughout the movie instead of one jumbled, boring exposition in the first 20 minutes. Also in contrast to pornos, The Invitation takes its time with foreplay, patiently seducing your mind with psychological terror before an explosive climax. As a viewer, you enter an L.A. dinner party amongst friends hosted by some strange characters as you examine the dynamics of recovering from tragedy and politeness in the face of danger. It’s realistic in the sense that the characters are neither cliche horror-movie morons nor too smart to be believable. It teases you constantly and runs along with a brooding sense of growing terror and paranoia. You keep waiting. And waiting. And you wait until the point where you wonder if there is any horror at all, or if the presumed dread that awaits is simply all in your head. I don’t want to give away any surprises, because the beauty of this movie is that each turn and revelation keeps you guessing, reveling in suspense and psychological terror.

Southbound is another low-key horror with solid reviews. It’s an anthology horror flick in the same vein as VHS and Trick ‘r Treat. Except each of the stories tie together more than simply being standalone horror shorts. And a major difference between Southbound and the aforementioned movies is that it isn’t scary. Or suspenseful. Five (or six?) interwoven stories take place along a barren desert highway in the southwest United States, where the road is thematically a purgatory-like path of terror, where the protagonists (who you won’t care about), are tortured by past sins and forced to repent or face eternity in hell. Cool premise, but the movie was a total dud aside from one segment.

While pursuing Reddit, I saw this stupid title come highly recommended as one of the best overlooked movies of the year. Great reviews and praise allowed me to look past the dumb name that promised I’d be in for an hour and a half of lame hipster malaise. The main character’s house is robbed, so she teams up with martial-arts obsessed neighbor, played by none other than Elijah Wood (Frodo) to get lighthearted revenge on the perpetrators. While the title did deliver on its promise some boring existential hipster fodder, this movie starts slow but eventually delves into the realms of hilarious and horrific. Imagine a poor man’s No Country for Old Men mixed with The Big Lebowski. It definitely has that Coen Brothers charm, but achieves its own identity through Elijah Wood’s character. The man is downright hysterical and a complete joy to watch, causing me to laugh out loud just about every time he spoke. Every minute of screen time and every word spoken by Wood is gold. And the epic Tarantino-esque ending satiates the appetite of violence lovers. Certain parts of this movie were so lovable that I found myself watching clips on YouTube and laughing again after I was done watching.

As a 90’s kid, Jurassic Park stood alongside Toy Story and The Goonies as a staple of my childhood. There aren’t many things more dope than dinosaurs. But after hearing poor reviews upon the release of Jurassic World, I decided to put it off until a week ago when I was lying on my couch nursing a hangover. While the first portion of the movie satisfied the childhood nostalgia, the rest of the film descended into a stupid remake of the previous, better versions of the franchise that we grew up with. Upon meeting each character, you already know – this guy will live, that guy will die, she will live, these two will end up together, this guy will die brutally, and so on. The characters are thinner than my hopes of a Daft Punk reunion tour. The unfolding story is more transparent than a greasy Five Guys paper bag. Spoilers ahead.

The amount of product placement is so obviously annoying that you almost expect a T-Rex to be running at a guy as the camera zooms in on him sipping a refreshing, sweaty bottle of Coca-Cola, devour the man, pick up his drink, take a sip, then wink at the camera and say, “things go better with a Coke” as the prehistoric beast washes down his human snack with the corporate beverage. That would be an entirely plausible scenario in this two hour commercial. Or how bout when the park is being terrorized by murderous flying alligators and the main two characters decide to have a romantic make-out session while everyone else is being scooped up and torn limb-by-limb in the background? Yeah, great time for a first kiss. Even better? Because T-Rexs and Velociraptors aren’t cool enough, the park engineers and even more villainous beast, which is thwarted when the T-Rex and Velociraptors exchange a fist bump and team up like Shaq and Kobe to defeat the new beast. While at times enjoyable for the CGI dinosaurs and sentimentality, this was a really stupid movie.

If you don’t mind subtitles and you crave anything and everything weird, Dogtooth is a must see. Taking a jab at overprotective helicopter parents, the story takes place in a remote estate where two psychotic, controlling parents trap their children in their home surrounded by a 20-foot-wall. They tell the children that the outside world is dangerous and that they cannot ever leave, because if they do they’ll be killed by the terrors of the outside, such murderous domestic cats. There is an unsettling strangeness that permeates throughout this movie, as the children think the mom is talking to herself while she’s on the phone, they are told that overflying airplanes are simply toys, and the father arranges for a prostitute to visit weekly to satiate the 20-some-year-old boy’s sexual needs. With gorgeously boring cinematography, the movie captures the feelings of melancholy, isolation, and hopelessness. But throughout the movie, the parent’s death-grip on their children starts to slip as the kids become more and more curious about the world outside of their home, and weirdness ensues. 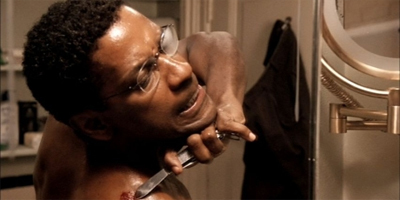 It’s Denzel, man. Never a waste of time. I have never seen the original from the 60’s, but this adaptation of the psychological thriller stands out as solid blockbuster. The Manchurian Candidate taps into everyone’s inner conspiracy theorist, as the story follows a narrative of political corruption, manufactured presidential candidates, government brainwashing, and elites being controlled by higher powers. Pretty relevant territory considering the times we live in. While the movie keeps you paranoid and it’s an entertaining ride, it doesn’t exactly break ground or qualify as a must-see. Solid performances from Denzel Washington, Meryl Streep, and that other guy. Cool story. Good movie. No more, no less.