This year, I have not been super hip with the latest movie releases, mainly because I’ve been busy and nothing has really piqued my interest.  However, I was in the mood to see a movie and a pretty girl wanted to see The Martian with me, so I decided to check it out.  Alright… Space, mars, Matt Damon, space, Kate Mara, Childish Gambino, space… I can dig it.

Now, keep in mind that I hadn’t heard much about The Martian and I didn’t know how it ended going in.  I just knew that it received favorable reviews. Plus, I’m a sucker for space movies and Kate Mara is pretty hot, so I had very high expectations. 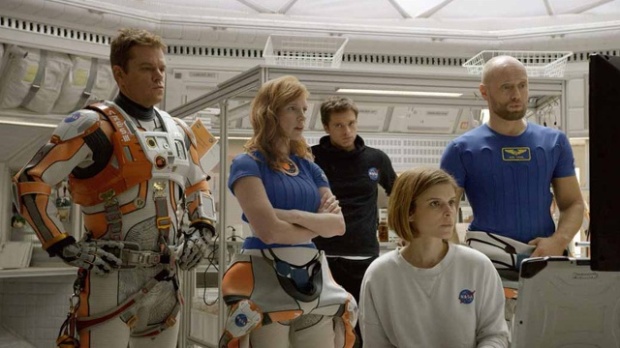 Okay, have you ever been left by your friends at the bar?  Yeah, imagine if your friends left you ON MARS.  I’d be pretty fucking ticked. Not an ideal situation.

Here’s how it went down: So, the space crew is on a Mars mission collecting rocks or some shit, until a sand storm hits and they decide to book it.  While making their way to the space shuttle to escape, Matt Damon gets smacked by some sort of space debris (Lmao). Fucking epic.

Consequently, the crew captain is all hysterical, “omg we gotta save Matt”, and everyone else is like… “nah”.  Smart.

They depart for home without Matt Damon, until they are finally alerted of his survival. You know at least one person on that ship was like, “I didn’t really like that guy anyways”.

First 0ff, who the hell, in their right mind, would want to go back and save Matt Damon anyways?  I mean, have you seen Interstellar?  He’s a conniving bastard.  I’d leave that dude to die, no doubt.

Back to Mars – roughly 10 minutes of movie goes by with Matt Damon being bummed he’s been left alone on Mars before he delivers this gem of a line: “I’m going to survive”.  Really dude?  This line was the equivalent of some douche bag whispering the ending of a movie in your ear. Come on. After he dropped that line, there is zero doubt he is going to die. Needless to say, that bummed me out.

Why couldn’t he just be a normal person and swallow a bottle of pain pills or something?

Okay, so Matt Damon gets deserted on Mars, he gets rescued in the end. Now what the hell can happen for 90 minutes in between to keep the audiences interested?  The writers struggled with this brain buster.

Every five minutes, some seemingly insurmountable problem arises and it appears as if Matt Damon has zero chance of survival. Then, within two minutes that problem will instantly be solved with some ridiculous solution (I don’t care if it’s scientifically accurate; it’s stupid).

Damon doesn’t have enough food to last him long enough until his escape?  Don’t sweat it – he has a eureka moment and decides to grow potatoes in his own shit.  Literally.

Eventually, Childish Gambino comes in to save the day and devises a plan to sling shot the returning space ship around the earth and send it back to Mars. Routine stuff.

The worst part is when he finally does get rescued; he’s all buddy-buddy with the crew again. Not even a “what the fuck guys?” moment.

Throughout the movie I kept waiting for the big reveal that him and Kate Mara were having some sort of romantic affair (10,000 mile high club ftw). But no, there was no romantic or sexual backstory. What a waste of having Kate Mara in your movie.

Hollywood, you have failed me.

Okay enough negativity, it was an enjoyable movie overall. If you’re 12. I’m kidding. It was tight.

Now, one thing that is important to note is the immense production value of The Martian – they did a great job with the desolate soundscapes to make me feel like I was right there with Matt Damon.  And my hip 3D glasses ($13 bucks per ticket, are u Fuckin kiddin me?) made the endless scenery of red rocks seem kind of cool.  Although the highlight of the visual experience was in one of the commercials, if I’m being honest.

While it added to the movie’s feel, the cinematography did an excellent job in killing all interest I ever had in space travel to Mars.  Seriously, that place is a barren, dusty wasteland.  I think I almost had an asthma attack just watching this movie.

Who the fuck in their right mind would ever want to travel to Mars?  And better yet, who would fund such an asinine mission?  Just go to the desert if you wanna play in the sand and collect some rocks. Save the cash. There are no aliens on Mars. There are no resources on Mars. And a pretty shitty view, to boot. So, if one positive were to come from this movie it’s the fact that we can close the books on the exploration of Mars. Now, we can allocate our money properly (lowering college tuition).

We’ve established that space is really dope no matter what, so the movie’s got that going for it. Ridley Scott gets a big red mark from me for not using Kate Mara effectively (see House of Cards season one). The plot was redundant and all over the place, but had enough feel-good moments to make it tolerable, and somewhat enjoyable.

While I love seeing space movies in theaters, it wasn’t worth the $13 admission fee, like Gravity was. Hell, The Martian made Gravity look like 2001.

I shouldve said said fuck the movie and gone for the in-theater blow job. Meh.